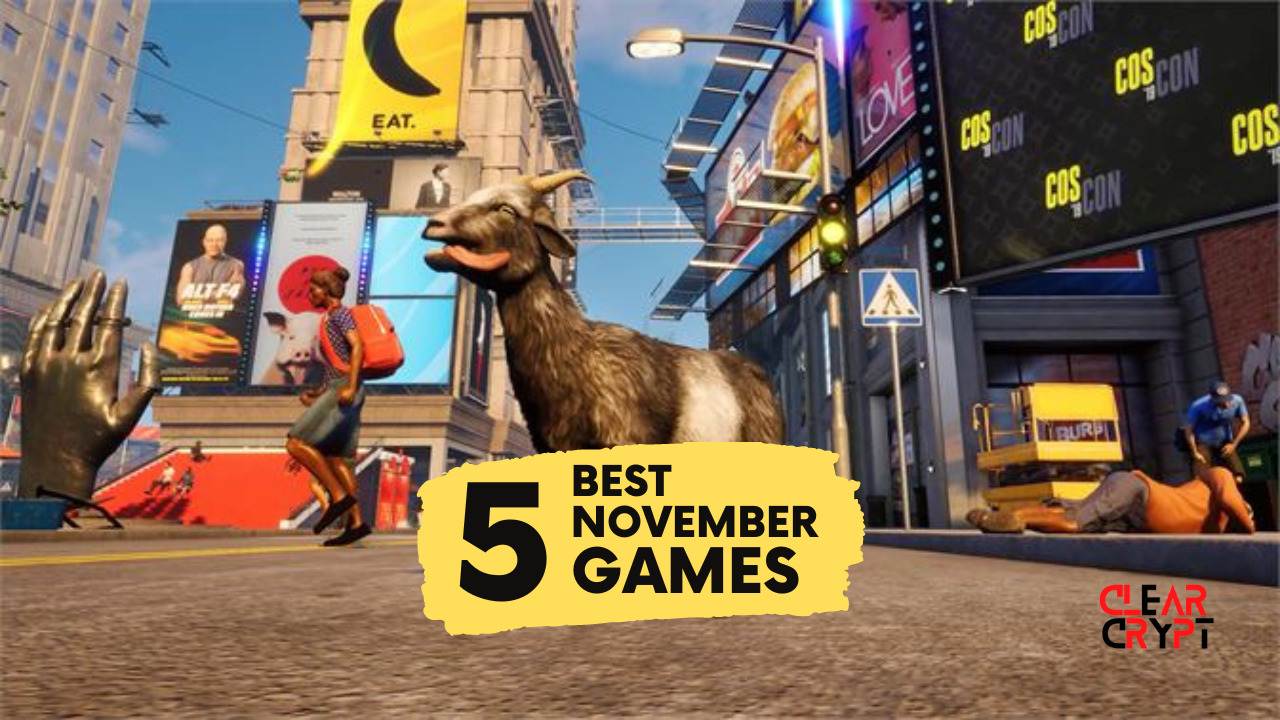 November 2022 is going to be the best month because this is the new release month for games. And here, Clear Crypt has put together a list of the top 5 best games including God of War: Ragnarok, Pokémon Scarlet and Violet, Gungrave G.O.R.E, Goat Stimulator 3 and Evil West. The most interesting thing is that they are coming out this month, and you can watch the trailer here.

The big daddy of all the games releasing this year, other than “Elden Ring,” it’s “God of War Ragnarök.” In terms of, like, beloved games, the “God of War” reboot is way up there. It was a huge success. Its launch on PC was fantastic.

They’ve expanded the world, given you a lot more to do. We’re encountering a lot more of the bigger Norse mythology names, including Thor in this game. It’s just going to be a good game. You know it. It’s a two-game series, this Norse mythology thing, and then they’re moving on to whatever is next for “God of War.”

“Pokémon Scarlet and Violet,” which brings us some of the advancements of “Arceus” while retaining a turn-based battle system. It’s kind of the best of both worlds. A lot of the stuff that we liked about “Arceus” was just how it handled the open world within the context of a Pokémon game.

However, it was more of an action RPG and this is more of a traditional Pokémon game. But obviously, there are a few things that are different. There are no battle transitions now. You get into battle, you’re just on the open-world map fighting.

It also brings in four-player co-op, multiple stories, and it takes place in a new region called Paldea. But there are a lot of “Breath of the Wild” comparisons without it departing from the actual Pokémon formula. It is a really pretty game, although it does clearly suffer some limitations from being a Nintendo Switch game.

“Gungrave G.O.R.E,” a sequel to, actually, some older games, “Gungrave” and its sequel from 2002 and 2004. This looks to revamp the shooting aspects of those games with some more, again, like, in all honesty, “Devil May Cry”-looking stuff, that sounds very good. The footage of this game is really cool-looking. Where the original game didn’t really bring the kind of variety that it looks like we’re getting in terms of locales that this game does. Like, it looks extremely fun, cause these types of games, we really haven’t seen a lot of in a while. These sort of mid-tier surprise gems.

“Goat Simulator 3.”Yes, uh, “Goat Simulator 3.”They didn’t bother with “2,” that’s fun right? The original “Goat Simulator” was, of course, just a bizarre and silly, not actually, goat simulator. Like, you played as a goat, along with other goats, are seemingly stupid and rock-brained, but you weren’t doing goat stuff for the most part, you’re generally causing havoc and are secretly smart enough to have their own kingdom in Hell, And that’s back. It’s been amped up. Graphics are way better. And now you’ve got four-player co-op, which 100%, absolutely, yes, exactly what “Goat Simulator” needed. This is going to give you a deep experience, but in terms of chaos, watching the trailer for “Goat Simulator 3,”the second “Goat Simulator” game, it just looks like a delight.

“Evil West.” A pretty darn cool-looking, vampire-slaying, third-person shooter set in the Old West. “Evil West” comes to us from Flying Wild Hog who developed “Shadow Warrior”, this is probably one of the most interesting aspects. It’s a third-person shooter that the developers have noted their influence as games that are definitely not shooters, like, exclusively shooters.

Like, a third-person shooter that is integrating ideas from those areas. And also there just aren’t enough Old West games that really mess with the setting. “Evil West” really seems to do that in spades. Looks like a great game.