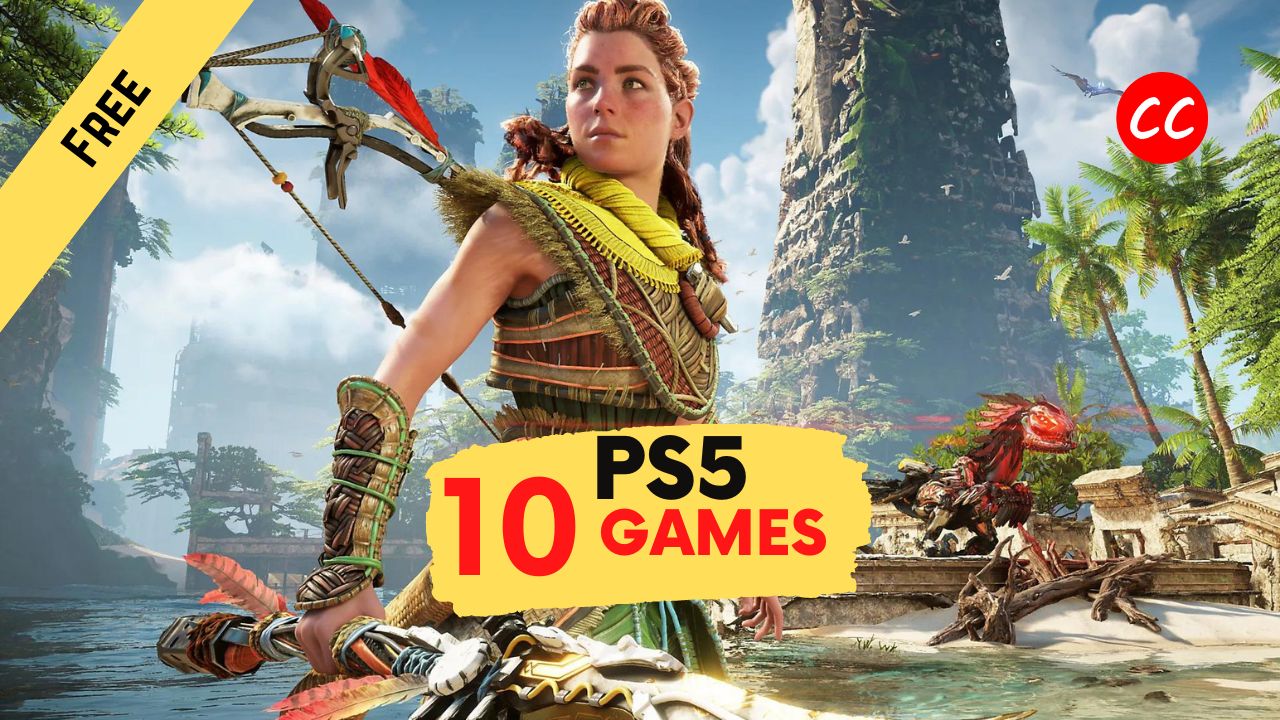 Here are the top 10 best PlayStation 5 games to play right now. If you are a PS5 owner and wondering what games you should jump on next, hopefully this article will give you some ideas. Most of these, in fact eight of them, I have completed or platinum, so I’ve only included the games I’ve actually played. But before I start, let me know your favorite game or a PlayStation 5 game that everybody should play right.

So, it’s no surprise that God of War: Ragnarok has made it onto the list for me. This was the Game of the Year for 2022, following on from God of War, which was released in 2018 on the PlayStation 4. You play as both Kratos and his son Atreus, crossing several realms and fighting gods and monsters along the way. Some of the threats you come up against include Freyja, Thor, and Odin, as well as some allies and interesting characters. Visually, this game is stunning and some scenes are incredible, but the gameplay and the story is what really captured me. It runs at up to 120 frames per second and supports VRR, so it is very smooth, even during intense fighting scenes. Although you don’t need to have played the previous God of War, as there is a recap video at the start of this game, I would still recommend playing it to get the most from the story. And since PlayStation has stopped making difficulty-related trophies for their first-party games, you can easily get the Platinum for God of War if you put the time in.

So, if you’re looking for an open-world game where you can swing from the rooftops, you’ve got to give Spider-Man: Miles Morales a go. Following on from the original Spider-Man, while Peter is in Europe, Miles Morales steps in as the New York superhero. It’s a pretty short story overall, I think it comes in at around 8 to 10 hours, which for a single-player game isn’t much at all. And some of the fight scenes can be a little repetitive as you battle groups of thugs and enemies, but it is still a lot of fun with a great story. I also think that Miles is a brilliant character to play, and depending on which visual mode you choose to run, you can get up to 120 hertz and VRR in performance mode, and performance RT is the mode that I usually go for, and I’ll tell you what, it is smooth. I’ve played more than 32 hours on this game, and it is buttery smooth as you’re swinging through New York City. Plus, visually, it looks awesome.

Ratchet and Clank: Rift Apart is a game that’s easy to play, loads of fun, and has great visuals and gameplay. It also makes great use of the DualSense controller features. The game features great characters, including Ratchet, Clank, Rivet, and the self-proclaimed super villain Dr. Nefarious. I’ve put just over 20 hours into it, probably a little less to get the Platinum, but with the 120 hertz and VRR support, it looks incredible. There are about 75 previous games in the series, and although you could play all of them to understand the characters a bit better, there’s no problem just jumping straight into Rift Apart. Plus, it’s definitely the best-looking one, incredibly vibrant as you travel through the different levels.

The Last of Us Part One is technically a PlayStation 5 game, but that’s only because it’s a remake of a PS3 and PS4 game. Originally released back on the PlayStation 3 in 2013 and then remastered for the PS4 and remade for the PlayStation 5. Most of us have probably played this game one way or another yet it still somehow made its way onto my top PlayStation 5 games to play. That’s because, although it follows the same story as the original, for me, the visual improvements make this feel like a whole new game. Even so, I did complete it on both the PS3 and PS4, I still went ahead and got the Platinum on the PlayStation 5. You play as both Joel and Ellie, although you play as Ellie only briefly, as you travel across a post-apocalyptic America. There are infected everywhere, including Runners, Bloaters, and the worst ones, Clickers. I can imagine this game getting a lot of hype over the coming months with the recent release of the TV series and rightfully so, as it is an incredible game and one of the best stories I’ve ever played.

Released in mid-2022, Stray is one of the most chill, simple yet enjoyable games on the PlayStation 5. You play as a cat that is separated from its family as you navigate through 12 different levels, solving puzzles, and helping residents as you go. The story is set in a cybercity where you have to escape and avoid various enemies while following a relatively linear path. Although I have finished the game, I’m yet to go back and clean up the trophies for the Platinum. It’s also quite a short story, as the game is around five to six hours to complete the main story. But, if you like cats or you like an adventure game that is different to the norm, this is definitely worth playing.

Now, if you didn’t know this already, every PlayStation 5 comes pre-installed with Astro’s Playroom. And, although it is a free game, it’s still one of the most fun games to play. If you’ve ever seen or played Astro Bot on a PlayStation 4, you’ll know who this is. But, you run around exploring several zones inside your PlayStation 5. There are some really cool Easter eggs in here as well, including some old PlayStation consoles and accessories. This area alone is worth exploring. Then, when you go off and play the different levels, including Bot Beach, Render Forest, and Gusty Gateway, you realize how every challenge and area is optimized for the PlayStation 5 controller. The haptic feedback and adaptive triggers really come to life in this game, and it shows just how awesome the DualSense controller is. And it’s for this reason alone that every PS5 owner has got to play this game.

GT7 had a pretty horrible launch, there’s no denying that. But, if you want a graphically nice-looking racing game with a variety of cars, it’s really hard to pass on this one. The menus are a little clunky with this map-like design, but the race handling, modifications, and visuals are great. It’s one of those games I can pick up and play for a couple of hours when I don’t have much time for anything else. Now, I play it at 60 frames per second on the PlayStation 5, and it looks incredibly smooth. I know I should probably be playing this with a steering wheel rather than a controller, but even that still plays perfectly well. But, let me know what other racing games you would put ahead of GT7.

So, I’ve mentioned Miles Morales already, and if you opt for the ultimate edition of that, you will get the remastered version of the original Spider-Man game. For me, this is a huge step up from the PS4 version, as it also runs up to 120 frames per second and VRR, that’s if you’re using the performance or the performance RT mode. Of course, there is the Fidelity mode which does prioritize the resolution instead. You play as the classic Peter Parker, who gets bitten by a spider and gains those super-human or super-insect abilities, climbing walls and swinging through New York City. Throughout the game, you face several super-villains as well as hundreds of thugs and enemies that you need to fight off and defeat. If you’ve got the time to play through the story and find all the collectibles scattered across the city, this is also a relatively easy Platinum. I did play this on the PlayStation 4 as well as a PlayStation 5, so it’s easy one of my top five games.

Next up is Horizon: Forbidden West, which is an open-world, third-person RPG. It is also one of the best visually appealing games that you can play on the PS5 right now. It’s set in a post-apocalyptic world where it’s futuristic with robots that resemble dinosaurs, which have essentially taken over the world. I feel the combat, story, and open-world landscape makes this one of the most rewarding games that you can play. It of course follows on from the PlayStation 4 version of the game, which was called Horizon Zero Dawn, so if you’ve played that game already, you’ll want to jump straight into this one next. It is also incredibly smooth if you play on the performance mode, which gives you up to 120 hertz and VRR support. So, I have completed the story and put in around 45 hours so far, but I will need to put a few more hours in to finish the trophies.

Kina: Bridge of Spirit, which is one of the nicest games I played in 2022, was an easy game to add to the list. You play as a young girl called Kina, traveling through a village that has been corrupted by spirits. Along the way, you meet Rot, these little magical creatures that help you with your journey. They’re kind of like little psychics. You’ve got different abilities and skills which you unlock as you play, and the more Rot that you find, the more you level up your skills, which you will need later on for those combat and puzzle areas. Then there’s the sound design, visuals, and story which are quite literally captivating. I have finished the game, but again, I just need to go back and clean up some of those trophies.