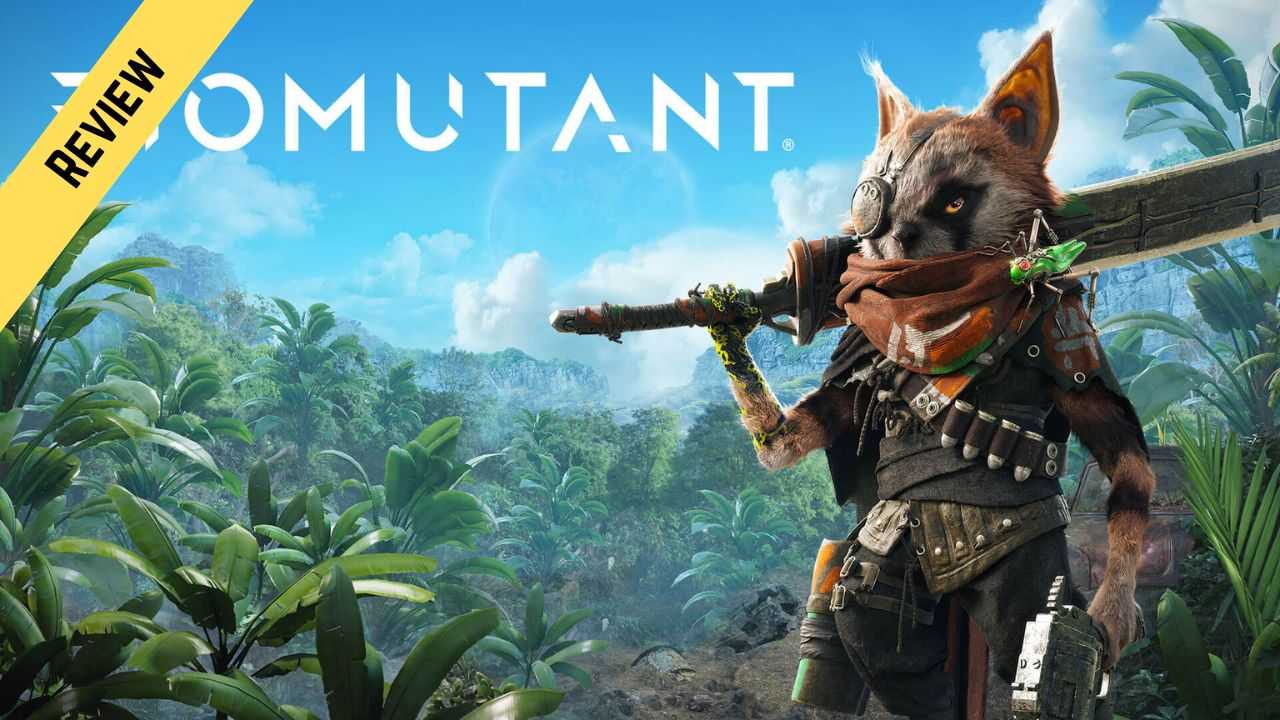 Today we’re going to be reviewing Biomutant, which came out last year on all-gen consoles and PC and looked extremely promising. but it ended up having way too many flowers to be good; it had performance issues, bad camera angles, half-picked game mechanics, meaningless choices, and a narrator that gets annoying. Several updates later, and most importantly, now that Biomutant finally came out on PS5 and Series X, is it good?

I reviewed the game on the PS5, and although the graphics haven’t improved a lot, It’s nice to see that, apart from the higher resolution, the lightning system is better. The textures are much more detailed now, and the most noticeable thing right from the character creation screen is probably the better looking, and we now have the option to choose between three graphics modes: High, which runs at 4K 30 FPS quality, and Unleashed, which offers Dynamic 4K.The frame rate varies between 40 and 60 FPS, and last but not least, performance mode, which, by the way, runs at 60 FPS at a 2K resolution—that’s the one.

I used throughout this review, and as you can see, the environments are beautiful, the character design is unique, and the visual effects are okay. The animations are a little wonky, even during cutscenes. That being said, overall, for a double-A open world game, I think it looks decent.

So let’s see how it runs, sadly, even in performance mode. I still experienced a few frame rate dips, and while the performance is far from perfect, those dips can definitely be felt every time. It’s still much better than the PS4 version, though, or even how it runs on my PC.

So I’ll take the PS5 version any day for those of you on Xbox series X I did a little research in other words. I looked up a couple of gameplay videos on YouTube and it seems to run and look pretty much the same as the PS5 version, so it’s not perfect but if you’re gonna be playing bio mutant in performance mode like I did we’re gonna have a good time.

The soundtrack is pretty good. I really like the main theme, and some of the music that plays when exploring or fighting is quite immersive. What wasn’t so immersive on the first day was the Wii’s unique sound design, which gave the player no feedback when hidden enemies appeared; thankfully, that’s been fixed by the game’s updates since then.

So the sound effects are more than just okay now, but when it comes to the voice acting, the ultimate, who’s also the narrator, and these light and dark little dudes, who are probably fairies or something, are the only characters who speak English. Everyone else speaks gibberish. So during dialogues, you have to wait for the narrator to translate, which means you can end up not really caring for any character, and that’s a shame. Anyway, I’ll let you listen to the game’s audio a little bit.

Valentina Dweller, out of date, says that from what he’s heard, you’ve been busy since I first played Bio Mutant. Last year, the first couple of hours almost bored me to death. The flashbacks and the narrator constantly interrupting the gameplay sections made me stop playing.

At this time, though, for the purpose of this review, I had to keep on playing, plus they adjusted the narrator’s frequency, so I actually ended up enjoying this game.

Now let’s discuss the pros and cons when it comes to the gameplay, starting with the good stuff: the update adds adaptive triggers for the controller, speaker, and haptic feedback support, and I think for a third-party game that’s pretty good. The low times are also way faster now.

When it comes to the game itself, the Grafton system lets you make all kinds of weapons; it’s as deep as the character customization menu, with plenty of specialisation options and combinations.

So whether you prefer melee, ranged, or magic combat, the combat systems have you covered. When you first start the game, you are asked to join a tribe, and later on you can either try to unite all tribes or defeat them and control the entire area.

Further down the line, the game is going to ask you if you want to end the drive war or keep on taking outposts. You should know that after the first one, it gets repetitive, but every time you defeat a tribe, you get a unique weapon. So it’s up to you; I’d rather play 20 hours of actual content than 40 or 50 hours of repetitive content, and if you enjoy exploration, you’ll probably enjoy this game because exploration is always rewarded; there are chests to open, towers to destroy, and optional boss fights.

So when you put the drive War Quest aside, there’s enough variety to keep the game interesting. You can do some crafting, trade, and Ryden, and you can also do some side quests to unlock all kinds of upgrades for your mounts. In all seriousness, you can even piss on signposts to unlock fast travel to that area.

Usually smaller games don’t have them, plus I’ve only faced one bug, which is the one you’re seeing right now. So it’s a well-polished game, but it has a tendency to make certain choices seem crucial and irreversible when, in reality, they don’t really mean anything. Puzzles are way too easy; actually, the whole game is too easy. I had to go from medium to hard to enjoy the combat a little bit more. I didn’t go all the way because I didn’t want to get kicked, and you should keep in mind that camera angles can be an issue when fighting indoors.

So after all these updates, what issues were fixed and what major improvements were made? Well, not much, so if you hated the game on all-gen then you’re still going to hate it, but if you liked it then the improved graphics and frame rate will make it even more enjoyable.

The first hour isn’t really enjoyable there are too many interruptions that ruin the Basin but when the world opens up and you start exploring unlocking new abilities and getting stronger bio mutant can be pretty fun. Last year I gave up on it quickly because I had so many other games to play and most of them were better. So I didn’t really give it a real shot, but this time I started it over and gave it a real chance, and I got addicted to it. I’ve actually been playing it several hours a day.

So if you’re considering buying it now that it finally got the next-gen upgrade, you probably should, which brings us to the value for money. Bio-muting is going to cost you $40 bucks, which I think is the reason why the game didn’t do well. Most people wouldn’t get over its flaws with that price tag, but if it were sold for, say, $30 bucks or less, it would have definitely gotten better reviews. That’s a good time to go shopping.

While there haven’t been any major changes made to the core gameplay, the enhanced graphics and performance as well as the Dual-Sensor support may make the PS5 version definitely more enjoyable, and even though the game is far from being perfect, I think it’s more than decent, which is why I’m going to give it 6.5 out of 10.