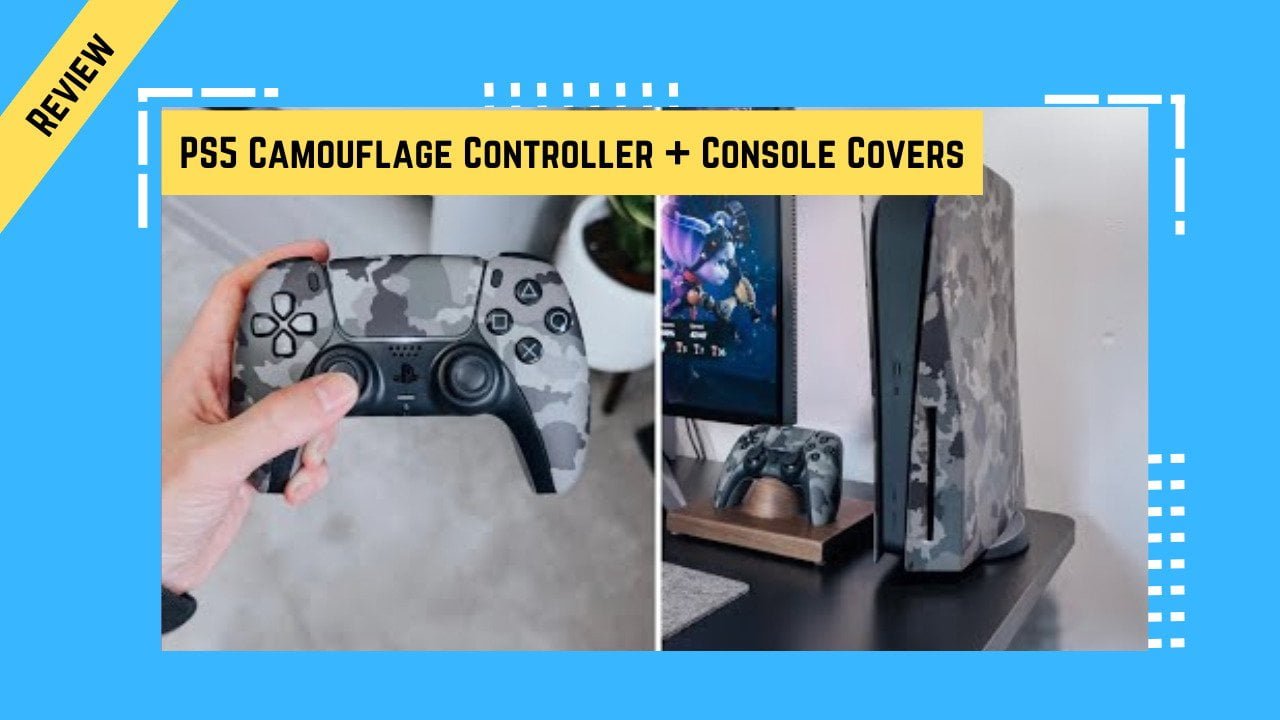 Hello readers, I am Abrar Khan, and today we’re doing a quick unboxing of the new grey camouflage accessories for the PlayStation 5. I’ve got both the console covers and the DualSense controller. I launched this last week. I’ll get them fitted, then I’ll show you what they look like in the setup. And I also wanted to show you a hidden design feature that’s exclusive to this new range. And of course, with the launch of Modern Warfare 2 this month, these plates are perfect for that too.

Let’s start with the controller first. So, like with any other Dual Sense, the box looks exactly the same with the same PS5 branding. The new design actually reminds me of the old urban camo dual shock controller, which was one of my favourites back on the PlayStation 4. So we’ve got the camo design printed on the left and right sides of the controller as well.

On the touchpad and that wraps around very slightly across the top, but holding this now feels like a different texture to what we’ve had. On the other controllers, it kind of fills out and looks a lot more matte rather than glossy, like the removable centerpiece.

On the front is black. It doesn’t appear to be any different to before, but if you look really closely at the controller in the light areas you can just make it out. They’ve added these tiny PlayStation icons printed in the design. It’s only a small thing, but I love the detail that they’ve added, and the buttons on the left and right are dark. They look very similar to the midnight. They’re like the black buttons that we’ve seen before; they’re kind of dark but also translucent.

Then if we flip this around, the back of the controller is a flat grey color, but it also has those tiny PlayStation icons in the grip, and again, same as before. There’s a Sony logo on the top along with a USBC port. It also has the adapter triggers haptic feedback and the risk of stick drift right.

Now let’s get the plates unboxed and installed to see how they look in the setup. So I’ve got the disc version here, but it’s also available for the digital PS5.

If you have that instead, here they are, and you know what, I was worried these would look a little bit Overkill I mean, the controller only has a little bit of grey camo whereas these are full-on. You’ll either love or hate it. But I think this could work once again. If you look really closely at the light area of the print, we’ve got these tiny PlayStation icons hidden away.

One thing I’ve already noticed about these plates is that they are awesome at hiding fingerprints or marks because of the midnight black plates. I’ve got them on already and they will show even the slightest mark or piece of dust, whereas these will definitely do a better job of hiding it.

They also have that matte finish to them again, just like with the controller, so they actually feel nicer than the normal plates. and when it comes to fitting them, it is just a two-minute job Unplug the PlayStation 5. At the same time, lay it flat on your table and pull the top corner and pull downwards at the same time. Then take the new plate and you want to slide that up. Do this on both sides and you’re done.

We have just made an invisible PlayStation 5. Here’s what it looks like in the setup, and this looks awesome. I wasn’t sure if I was going to like it, but I do think it just works. I’m using a matte black vinyl sticker in the middle, so that covers over the glossy panel that’s normally there. I think it matches it quite well.

Of course, I like my all black setup with the dark chair, desk, and all of the accessories, but now I’ve fitted the grey camo plates. They’ve honestly become my new favourite console covers and what do you think? Which one do you think looks better, the grey camo or the midnight black?

Now don’t get me wrong, the black is understated and clean, but there’s something about these new plates, plus it is Modern Warfare in two months. So I should probably keep them on for that and just for comparison.

Here are the other plates we’ve already seen from Sony, so there’s the cosmic rad, Starlight blue, Nova pink, Galactic purple, midnight black, and, of course, the original white. But I think the camo range It just hits different Oh, and don’t forget the first time that you turn on your new controller.

Firstly, you will need to plug it into the PS5, first because it will need pairing to it, and secondly, you can download any updates that are available. Here are all of the Dual Sense controllers that we’ve seen released so far, and here they are all together. I do think the grey camouflage definitely stands out against the rest and compared the new one to the midnight black, which was one of my favorites.

And then we’ve got the galactic purple, which is probably my second favourite now, but don’t forget, Sony just announced the launch date for the new dual-sense Edge controller. That’s the Pro Controller that will be launching in January next year. Pre-orders go live on October the 25th. So if you do want one, make sure you get your order in. I’m looking forward to trying one out in January as well as comparing it to the scuffed controllers that I already have.