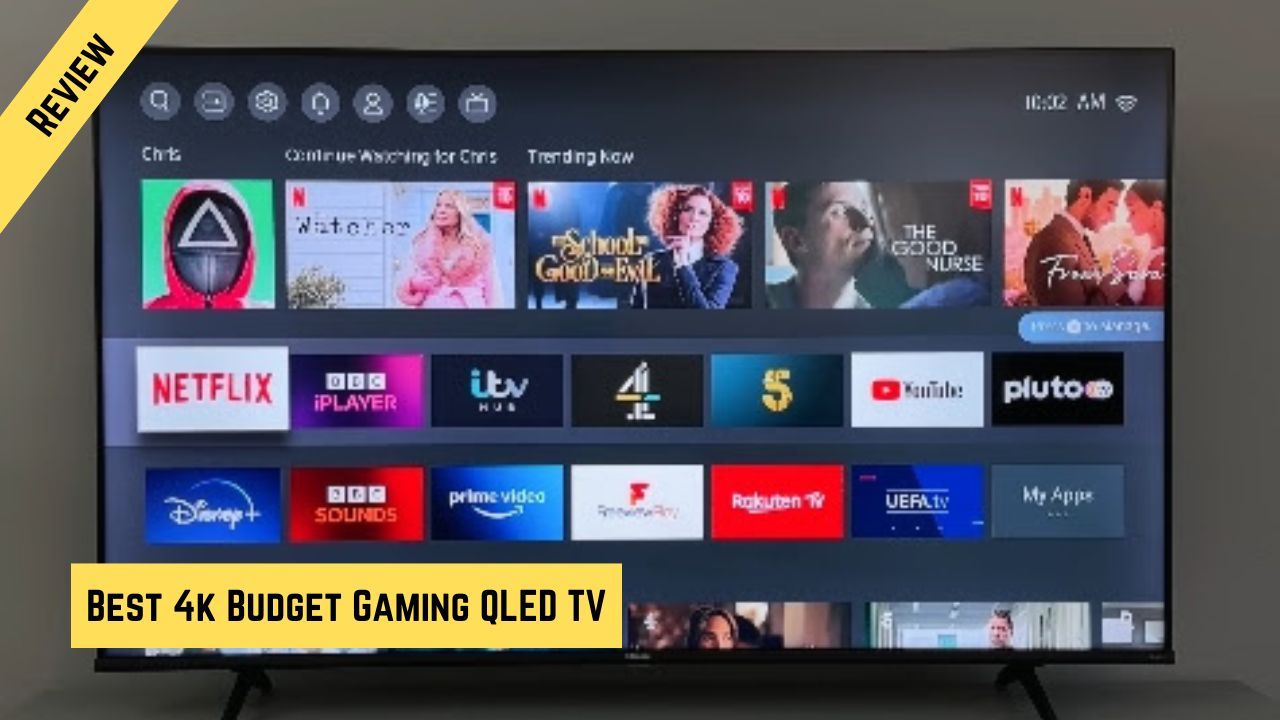 Not everyone can or wants to spend thousands on a new TV It’s why we’ve got flagship and entry-level TVs to suit everyone’s needs. If you wanted a TV for yourself or a family member, it wasn’t ridiculously expensive, but you could still get a decent picture quality and use it for gaming. That’s where this one comes in; it’s the latest QLED TV from Hisense.

The Hisense e7h supports 4K HDR and has some gaming features, including VR and alarm, which, of course, I’ve tested on the PlayStation 5 and Xbox Series X.

The model that I have here is the 55-inch version, which can be picked up for under 430 pounds in the current Black Friday and Christmas deals. It’s also available in both a larger and a smaller size.

It’s a QLED or a quantum dot 4K TV, which is essentially an LED or LCD TV with more pixels and over a billion vivid colors. This means viewing any 4K content looks great here, but it’s not only capable of displaying 4K content, it can also upscale non-4K content. So we’re near 4K resolution, so things like standard definition TV shows or channels will look even better on this than they do on a non-4K TV.

On top of that, as the TV supports Dolby Vision HDR, watching movies or TV shows on apps like Netflix and Disney Plus actually looks really good. It’s bright and colorful, and the contrast is decent, but like with any non-OLED TV, The black levels are not jet black, as LED TV just cannot compete with that. For a budget friendly LED TV, the contrast is decent.

Now, I don’t know about you, but I’ve noticed more and more people are using their TVs for gaming, whether it’s on the Switch, the Xbox series, or the PlayStation 5. Many of you see to play on the TV as well, and this TV definitely checks most of the boxes when it comes to running those new games, as it has a dedicated gaming mode designed to reduce input lag and optimise the screen for gaming.It has 4K 60 support, so that means it will run the latest games at a 4K resolution and 60 frames per second.

I know immediately you’ll think, “But that’s not 120 hertz,” and you would be right, but for the vast majority of games out there, they do only run at 60 hertz, especially if you’re playing them in resolution mode. It does also support a couple of features that other affordable TVs don’t, and those are ALM, or auto low latency mode, and VRR. The variable refresh rate means that Xbox One and PlayStation 5 games will provide a variable rather than a fixed frame rate, giving you a smoother experience with less stuttering and screen towering.

Now that a low-cost TV like this supports VR and 4K, it’s ideal for gaming. Sure, 120 Hz would be nice, but are these price points and sizes realistic? You cannot go wrong with it. Here are all the features supported by the Xbox One X, which also applies to the PS5 in terms of input lag.It’s rated at 20 milliseconds, so it’s not going to be as quick as some of the gaming Focus monitors and TVs out there, but for anything non-competitive, this is quick enough for normal gaming. I tried a few games of Modern Warfare 2, and I just could not play them. but if you play racing games or story-driven games, you will have no issues with this TV.

The screen does have a matte or anti-glare coating; this naturally means it will reduce reflections while watching it during the day. If you place it near a window, it will likely still show something on a sunny day, but under normal viewing conditions, this is absolutely fine. I find watching it straight on or even at a 20- to 30-degree angle makes the picture easy to watch.

It’s only when you start to go off centre by about 40 to 45 degrees that you start to notice the contrast, and the colour starts to fade very slightly. Sincerely, if you’re watching this straight on, the picture looks great. In fact, I’ve used a few other TVs this year that are five to six times the price and don’t look as good as this.

So on top of movies, TV shows, and gaming, you might want to use this for sports. The fact that High Sense is a FIFA World Cup 2022 official sponsor. Now that Hisense is an official sponsor of the World Cup, the TV not only has a sport mode that optimizes the picture for watching the game but also has a dedicated button on the remote to open a football app.

They’ve got exclusivity for the FIFA Plus and FIFA World Cup Daily apps, which are exclusive to the Veda Power TVs, and this lets you watch highlights updates and behind-the-scenes content completely free. Now, straight to the TV. If you’re going to be watching the World Cup this year, let me know who you’re hoping wins.

Now, as far as designer looks go, it’s clean, simple, and looks like a TV. The front of the screen has a floating panel design, so it looks like the display is suspended with an almost borderless look. then it’s just got a Hisense logo in the middle, and then there’s a Dolby Vision logo on the side. The model that I have here is a 55-inch, and this thing is crazy light, and that’s mainly down to the fact that it’s not a glass screen.

The materials used feel more like hard plastic than metal. Now, that’s not a bad thing as it keeps the weight and cost down, but the only downside is that it makes it feel a little cheap. The stand’s got two feet either side of the screen, which means there’s just enough room to probably fit a sound bar in the middle, although it might protrude very slightly onto the screen as it is quite low, but overall this does look like a nice TV.

For a TV this small, it packs some seriously loud speakers. They support DTS Virtual AX. The sound is clear and distortion-free, but they also have an awesome little EQ adjustment menu. I think this could be the first one I’ve ever seen on a TV, and the fact that you can adjust the bass or turn dialogue clarity on and off means you can tweak it to get it just right for your viewing. For my testing so far, the volume never needs to be above level 20. In fact, 15 is probably enough, and if you don’t want to use the internal speakers, it does have E-ARC support, so you can hook up your AVR or your sound bar and use that instead.

around the back at the available ports, so there were three HDMI 2.0 ports, one of which is labelled e-arc, two USBs, an optical out, and a LAN port. There are also two aerial and satellite ports. Now, the rear design is certainly different from what I’ve seen before, with a large housing of the internals in the middle, but it also has vessel holes here that are 200 by 300 in case you wanted to wall mount it instead. There’s even a removable power cable, so if you wanted to wall mount it, you didn’t need to feed the plug through the wall.

This high sense TV is running the Veda UI 5.0 smart OS, and you know what this is? If you’ve ever used an Apple TV, you’ll notice how similar it looks, and that’s a good thing. It’s easy to use, fast, and looks great. You’ve got all of the pre-installed apps listed in a tile format, which you can rearrange as you’d like. There’s also an app store where you can download more. It’s got everything you need, like Netflix, Disney, and Prime. YouTube and all of the UK streaming apps

As for the remote control, well, it’s functional and does what it’s supposed to do. There are some quick access buttons at the bottom for a few of the apps. It’s very light and looks a little boring; it reminds me of an old VCR remote.It is easy enough to use, and then there’s the input menu, which is where you can view all of the devices that you’ve got plugged in. You can rename the input so you know which is which. It also includes Alexa, Google Assistant, and Vedic voice, allowing you to search for movies, TV shows, and even control your TV with your voice and an HDMI cable.

If you’re wondering what’s inside the box, we have two features that simply push into and screw into the TV’s base.Then there’s a manual and warranty information, some screws for the stand, a removable power cable, the remote control, and some batteries.

If you’re on a budget and you need a 4K TV that supports HDR, has a fast and snappy UI, and you don’t need that 120 hertz for gaming, this is a nice screen at a great price. The current offer means you’re getting a 55-inch TV for under 430 pounds. There are other sizes available as well, both smaller and larger, depending on what you need.