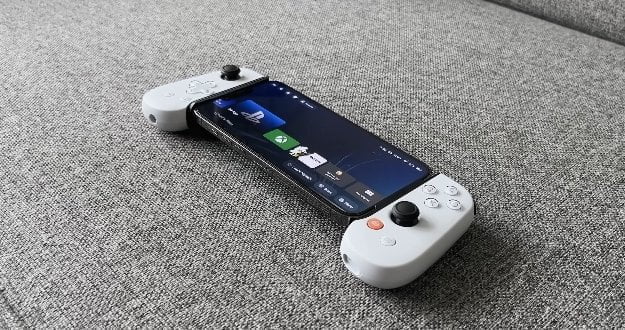 In this article, we’re taking a look at the official PlayStation Backbone One controller and reviewing it after using it for a month. It comes with full support for the iPhone and the PS5, including the various buttons, remote play, and, of course, this awesome new design. I’ll get this unboxed, set it up, and show you how it works with the PlayStation app as well as a few non-PlayStation games.

I’ll also try to answer some of the questions you might have had about this device. Now, I’ve only been using this for the last month, but I already think this could be the ultimate mobile gaming, or even PlayStation 5, accessory to buy right now.

Here’s the box, and straight away you’ll notice it’s clearly on brand with the PlayStation 5. In fact, it looks like every official accessory that we’ve seen from Sony. Inside the box, we get the Backbone One controller itself, which looks awesome, and then there’s an adapter for the larger iPhones, a quick start guide, and a safety sheet.

Backbone One Design and Setup

So first impressions on this controller, well, I really like the colour and the design. I know it’s similar to the original Backbone One controller, but this has a nice, clean black and white PS5 design. It also matches the dual-sense controller if you’re still using the white one.

Looking around, there’s the Backbone logo on the front, which will obviously be covered up by your phone once it’s installed, and on the back, there’s a Playstation logo, which is a really nice touch, but yeah, on first impressions, I do like the look of this controller. When it comes to setting it up, it’s a simple plug-and-play. Pull the controller apart and just slide your phone in, but make sure that it fits into the lightning port as this is how it connects to your iPhone; it’s not via bluetooth.

Now, this controller does fit and support every iPhone since the 6s, so anything up to and including the 13 Pro Max will need an adapter to fit it due to the camera bump. but fortunately this adapter is included in the box.

I’m using the 13 Pro Max here and it fits absolutely fine with the adapter, although I did need to remove my case first, and here’s the iPhone 13 Mini without the adapter to give you an idea of what the smallest iPhone looks like with it. Once fitted, you just need to go ahead and download the Backbone One app as well as the PlayStation Remote Player, but I will cover more on that in a minute.

As for the controls, we’ve got pretty much every button you would expect to see; it really is like a mini PS5 controller. There’s the d-pad with that transparent design going on, and these feel really nice and firm to the touch. Then we’ve got the triangle, circle, cross, and square icons on the right; now you might have noticed that the thumb sticks are different from what you’d expect to see on an official PlayStation controller; these are more like the XBox or Switch controllers without asymmetrical layouts.

but they are also very small and not as big as the normal console controllers, but they are still clickable and feel very firm. Then we have four extra buttons, so one of these is the share or screenshot button as you’d expect to see on the PS5, and the other is a screen recording button that actually lets you record your game play straight to your iPhone.

On the right side we have a dedicated Backbone app button, which I will show you more about in a minute, and next to that we’ve got the start or the menu button across the top we’ve got the L and the R buttons or triggers, which feel really nice. These are actual triggers too, rather than digital buttons, so in some games like racing games, for example, you have a more linear response than just an on or off right.

Let me show you the Backbone app, and the quickest way to do this is to use the orange button on the controller. Now that this app is optional, it’s not required to use with the controller at all, and it’s actually very, very good. The interface is nice, and it carries over the Playstation blue theme. And you’re able to see all of the games and streaming apps available.

You can of course navigate around this app using the controller or your touch screen, and as you can see, there are popular or featured games all listed in the same app. Now, not all of these are installed on my iPhone or on my PlayStation; some are just recommended games to download and play, but as you can see here, there’s also the Xbox app as well as the remote play app, and if you tap them, it will jump straight over to those apps instead.

Now, as you can see, we’ve got full control of my PlayStation 5 via the iPhone. Obviously, this feature isn’t new; we’ve actually had this app for quite a while. but being able to navigate around with the backbone one controller is so much easier, or at least it’s far easier than using the touchscreen controls on the phone, so my PS5 is wired to my network, which is going to be the best option when it comes to reducing the lag, and as I navigate around the dashboard, it’s near-instant; there’s no delay at all. Both my iPhone and PlayStation 5 are on the same network, but they don’t need to be. As long as they both have a good internet connection, you can still log in and play.

If you want to use your mobile data, you can do that as well. You need to go into the settings on the PS Remote Play app and enable that under mobile data, but again, there’s little to no lag, and that’s considering I’m accessing the PS5 via my mobile data rather than the local wi-fi and while we’re on the PS5.

Let me show you what these buttons do. So the share button acts the same way as the share button on the DualSense controller, and that lets you capture gameplay and share it through the console. The other button is for capturing gameplay directly to your iPhone, so this is a really cool feature if you want to keep it local. And if you wondered what happens to the PlayStation 5 while you’re logging in remotely, well, it turns the console on as normal, so anybody sitting in the room would see exactly what you were doing.

Now, playing games like WarZone is probably not ideal for remote play, but the fact is, I can play them if I want to. I mean, the input lag on this is fast, but it’s still going to be too slow for FPS games where you need lightning-fast reactions. But any other games where you don’t need that instant response are absolutely fine, for example Gran Turismo 7, which works well and has great triggers.

As mentioned before, the triggers, or the L2 and R2 buttons, are linear, so you can adjust how much power you wish to use. and why you’re gaming, you can of course use wired or wireless headphones. So, for example, if you have some AirPods, you can obviously connect those to your iPhone via Bluetooth, but if you have a pair of wired headphones, you can use a 3.5mm headphone jack on the controller itself. Also, while gaming, you can still charge your iPhone as there’s a pass-through port on the bottom. Remotely playing games on here is easy and fast, and they look great. The controller feels nice and balanced as well; it’s not too heavy and not too cheap and plasticky. It really is like having a portable PS5 in your pocket.

If you don’t have a PlayStation 4 or a PlayStation 5 or you just don’t want to use the PS Remote app, well, you’re not limited to just using PlayStation games; you can actually use other games in the app store now. As long as the games you’re wishing to play have controller input support, you can use it with pretty much anything.

So if you’re on XBox, for example, you can use the XBox app to control your Series X or your Series S and play those games, or if you wanted to play some mobile games instead, like COD Mobile, again this will work. Now, I don’t play this game that often, but the last time I did was with the RedMagic 7 mobile phone, which had inbuilt shoulder triggers. That phone was really easy to use, but this controller is on a whole different level. I’ve also tried a few apple arcade games and games from the app store, and as long as the controller support is listed, they will obviously work well. Of course, you’ve got other streaming services you could use your iPhone for as well as this controller, which includes Stadia and Nvidia’s Geforce.

As for the price, the backbone one is just under £100 or $100 when you buy it directly from their website; it was actually the only place I could find them. When I bought one earlier this month, delivery took just under three weeks. Now, one hundred pounds or one hundred dollars might seem expensive for a mobile controller, but I feel it’s actually worth it with the design and functionality that you’re getting. It also comes with a 30-day, no-questions-asked money-back guarantee as well as a 12-month warranty. Of course, if you’ve already got an iPhone and a PlayStation 5, you don’t technically need one of these controllers. You can, of course, use the remote play app on a normal controller and connect it via Bluetooth. It will obviously work, but it’s not going to be as good as this dedicated backbone-one controller.

Final thoughts on Backbone One

So my final thoughts on the PlayStation controller for iPhone are that I really like it. I mean, what’s not to love? It’s on brand with the PlayStation 5. It fits my 13 Pro Max, and it’s small enough to store away when I’m not using it. I also think it’s far better than just using a DualSense controller over Bluetooth. So until Sony releases an updated PS Vita, this is the best and cheapest option right now. But what do you think? Could this be the ultimate portable mobile gaming accessory to buy? Will you pick one up for yourself? Drop a “Backbone PS5” in the comments.