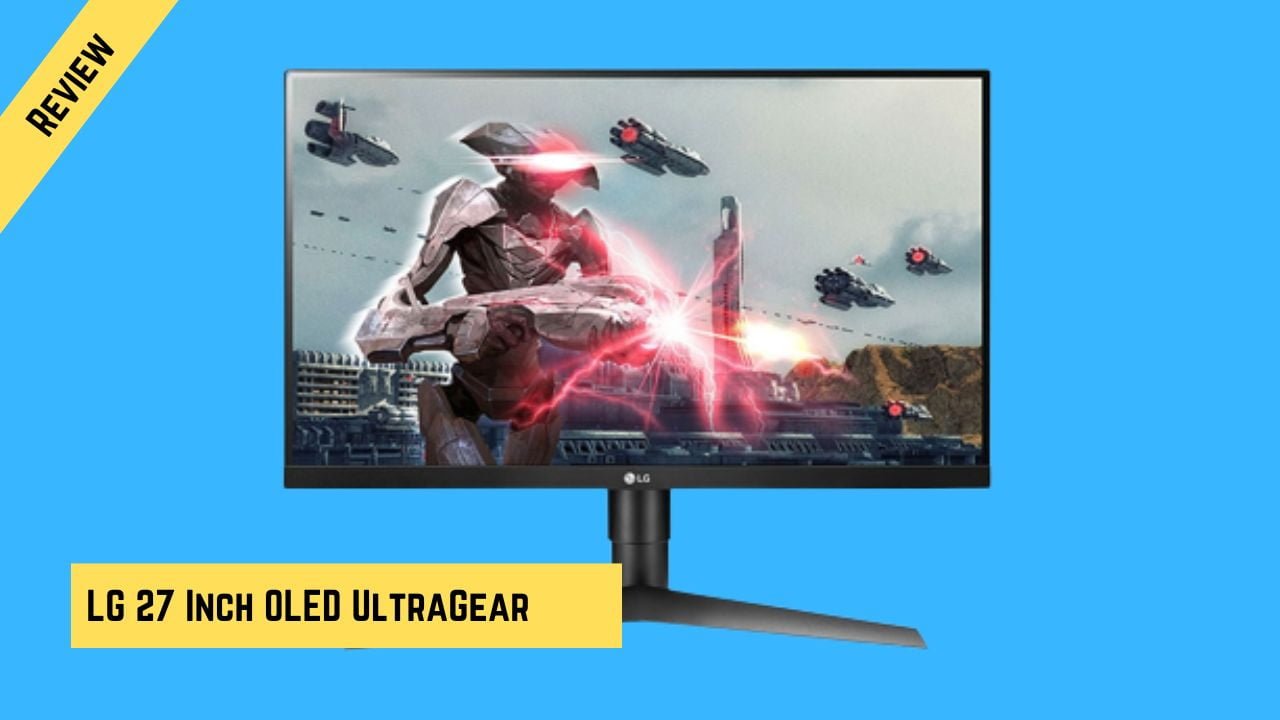 In this article, we will review the world’s first 240Hz OLED gaming monitor. It has a 27-inch OLED screen with HDMI 2.1 VRR, G-Sync, and FreeSync Premium support. It also has a DisplayPort 1.4, a fancy remote control, and an awesome rear design incorporating LED strips.

It is the 2023 LG UltraGear, and its full name is the 27GR95QE. But could this be the end-game monitor that we’ve been waiting for? Well, I’ll unbox and set it up, then we’ll go over the awesome features, picture quality, and performance for both gaming and productivity.

So, inside we get a box of accessories and a two-part stand. The accessories include an HDMI 2.1 cable, a USB cable, a DisplayPort 1.4 power pack, a cable clip for the back of the monitor, a remote control, and the manuals. Now, like with most of the LG monitors, the stand comes in two parts.

We’ve got this piece that attaches to the back of the monitor and has a quick release function, and then we’ve got the feet. The first thing that I want to mention is that this year, the stand actually comes with metal features rather than plastic, so it immediately feels like a premium product.

I also like the fact that it has the LG UltraGear logo printed on the feet rather than the arm this time. And then around the back, we’ve got the green and video logo which is on the rear instead of the front.

Installing the stand is a two-minute job, and no tools are required. Just slot the feet onto the bottom part of the stand and tighten it up by hand. The top part then slides onto the back of the monitor using these clips, and that’s it, we’re good to go.

The front of this OLED monitor looks awesome, but we must appreciate the design that’s gone into the rear. It’s very similar to the GQ950 that I had before, but it’s even nicer, especially with the ultra-thin frame.

The back panel has a hexagon design that protrudes slightly and includes LED strips on either side. By default, these are purple, but you can change them in the monitor’s settings.

This adds a nice ambient glow at night while gaming, but they aren’t too bright. The ultra gear logo at the top has a nice purple foil-like texture, and there’s a quick release button for removing the stand. The monitor’s dimensions are also provided for your setup.

So, as for connectivity, we have two HDMI 2.1 ports, both of which are capable of up to 240 hertz. We also have one DisplayPort 1.4, an optical out, and three USB 3.0 ports. The inclusion of the DisplayPort means that you can hook up a PC or Macbook to take full advantage of the resolution and refresh rate.

As for cable management, there is no trunking inside the stand, but there is a little clip on the back that allows you to keep your cables out of sight.

From a design point of view, this is by far the nicest-looking gaming monitor I’ve ever used. The bezels around the sides are ultra-thin, giving it a nice borderless look. But the fact that it’s an OLED means it’s really thin and the sides look as slim as the recent OLED TVs from LG. Paired with the metal feet and the purple line across the bottom, it looks like a really nice, clean monitor to have on your desk.

However, one thing to note about the purple line is that it may add a reflection or hologram to your desk, depending on the lighting in your room. The stand also gives us every movement we need – it only moves up and down, but it also pivots, tilts, and swivels left to right. This means we can adjust the monitor without having to physically move the feet, something we’ve seen on previous models.

Regarding the picture quality, I have been using this monitor for the last two weeks and every time I turn it on, it has blown me away with its excellent appearance. It has an OLED screen which offers perfect inky blacks, a high contrast ratio, and brilliant viewing angles. The black levels are truly incredible and there’s no light bleed or blooming in dark scenes.

Whether it’s white text on a dark background or moving images across a dark scene, the highlights and shadows are perfect. Additionally, the colors are outstanding, with a P3 98.5 wide color gamut that makes them pop. Unlike with an OLED TV, where you need to tweak the picture settings to get an ideal image, these settings are perfect out of the box and I haven’t felt the need to calibrate them.

I have connected my PlayStation 5 and tested out various games, and they consistently impress me. One thing that surprised me is that this is a 1440p monitor rather than 4K. Initially, I was disappointed as I had exclusively used 4K monitors for gaming, but the clarity and quality of this screen is as good as 4K, especially at this size.

The brightness maxes out at 200 nits in SDR, which is relatively low for a monitor, but OLEDs don’t need to get super bright when compared to an LCD. Although this seems low in HDR, the peak brightness is 1000 nits and I have been using this in a well-lit room and have no concerns about the brightness.

Now, you’ve probably noticed this already, but it has an anti-glare screen instead of glossy. I know this is something that’s often discussed with OLED monitors, but I think it’s absolutely fine. It does a great job of reducing reflections in your room, whether they’re from lights or windows, so placing this in almost any part of your room won’t be a problem.

As for the viewing angles, this is as good as any OLED panel I’ve used before. I mean, sitting at a desk, you’re not really going to be watching it from the side, but it looks great in photos and videos from any angle.

When it comes to the performance of this monitor, whether you’re wanting to use it with a PC, PlayStation 5, or Xbox Series X, it will be one of, if not the best monitor of 2023 provided, of course, you want a 27-inch screen. It is also the world’s first OLED panel to come equipped with a 240Hz refresh rate.

Although I haven’t been able to test this myself as I don’t yet have a gaming PC, I can tell you that at 120Hz it is incredibly smooth, with no motion judder at all. This means that playing either of the new consoles from PlayStation or Xbox will look and play incredibly well.

Additionally, when you combine the HDMI 2.1, Nvidia G-Sync, and AMD FreeSync Premium support, as well as a 0.03 milliseconds greater grade refresh rate, this monitor is truly rapid. I mainly use this desk setup for FPS games, such as Modern Warfare and Warzone, and after playing a few games over the last couple of weeks, it’s easy for me to say that I will be keeping this monitor over my previous one.

It also supports HDR 10, so any games or content that support it will look a lot better than SDR, including the brightness. I’ve mentioned that this is a 27-inch screen, which coming from a 32-inch, I was a little bit concerned it might feel too small, but it seems to be the best size for FPS gaming.

In fact, I feel a lot more focused at this size, and I know a lot of others have said that 27 inches is probably the better size overall. Additionally, the monitor has an awesome gaming menu and settings built into it.

You can access the full UI and menus by pressing one of the buttons on the remote control. This allows you to view the current frame rate, and check if VRR is running, as well as swap between different picture profiles and modes. You can also choose to show the FPS counter on the screen at all times, and even add a crosshair in the middle of the screen, which is a great idea.

This monitor is not just for gaming, it can also double as a productivity monitor. You can use either the HDMI 2.1 port or the display port. I am currently using an M1 Max MacBook Pro, which is capable of up to 120 hertz. Unfortunately, this only works over USBC and not HDMI, but if you buy a USBC to display port cable, you will unlock the full capability.

The OLED panel combined with the high refresh rate makes for a great productivity monitor. The clarity of text is important, and this monitor has a PPI of 110.8, which, although not as good as a dedicated ultra-fine monitor, is still usable. When looking closely, I did notice slight fringing around some text, but when sitting back in my chair, it was not noticeable. Honestly, I would happily use this as a work monitor when I wasn’t gaming.

Now let’s take a look at the settings and menus. A huge upgrade that we’ve seen this year is that instead of using the fiddly little joystick underneath the monitor, we actually get a remote control to access the settings. So on here, we have all of the buttons that we could need to switch it on and control the monitor, such as volume, brightness settings, and mute. Then we have options like changing the game modes and turning VRR on or off.

If plugged into a PC, you can change the contrast, sharpness, and other picture settings, view the input list, change the aspect ratio, enable the auto switch for inputs, and even change the colors of the LEDs on the rear. By default, it’s purple, which is probably my favorite color, but you can swap or add different colors, such as red, green, or even white.

There are loads of other settings on here that you can view and change with the remote. A big one is the OLED car, so you can have the screen moved very slightly to prevent the image from sticking to one spot. There’s also this screen saver option, and if you want to, you can run the image or pixel cleaning option, where it will take approximately 10 minutes to run through the process of cleaning the screen.

I know a lot of you will have concerns over using an OLED for gaming, but with these options and tools built in, it should be that little bit safer. Oh, and there aren’t any speakers built into this monitor, but there is a four pole headphone out under the screen. It supports DTS headphone X, so if you plug a headset in, you will be able to hear your audio this way. Overall, I think.

This 2023 LG Ultra monitor is brilliant. It’s the first OLED monitor that we’ve seen with 240Hz, and it comes in at a decent size of 27 inches, which could be the perfect size for most. Not only does it look nice with the incredible black levels and contrast, but the monitor itself looks awesome. It’s a nice screen to have sitting on your desk.

Other than the low brightness level and the lack of 4K, which on a screen this size you don’t actually need, this is the ideal monitor. If you wanted to go bigger than 27 inches, they also do a 45-inch curved display, as well as, of course, the 42-inch OLED TVs, but that doesn’t do 240 hertz.